Mexican food has been popular in Melbourne for quite a while now, though typical Tex-Mex cuisine is the form that’s more prevalent here, particularly at fast food outlets. El Sabor translates to ‘The Flavour’ and sits at the calmer end of Victoria Street where Libertine used to be. El Sabor still offers tacos and burritos, but authentic Mexican fare is what they take real pride in.

The upstairs function room is quite popular, especially in cooler weather, when people can remain toasty by the open fireplaces. They’ve retained the golden wall and chandeliers from Libertine, giving the room a more up-market flair. There’s also a rather interesting round table for six that’s quite sought after.

To start, we tasted the beef empanadas. Thin and perfectly crispy corn-meal shells encased tender slow-cooked beef and a subtle hint of panela cheese. These were accompanied by sour cream and salsa bravas. Also on the table were a few bottles of El Yucateco hot sauce, including the XXXtra hot Kutbil-ik Mayan Style variety, which is not for the faint-hearted.

The Alitas – BBQ chicken wings – were marinated with tasty spices and served with jalapeno mayonnaise and refreshing pico de gallo (6 For $10, 12 For $15). Cooked well and satisfying to the palate, these are a certain crowd pleaser. 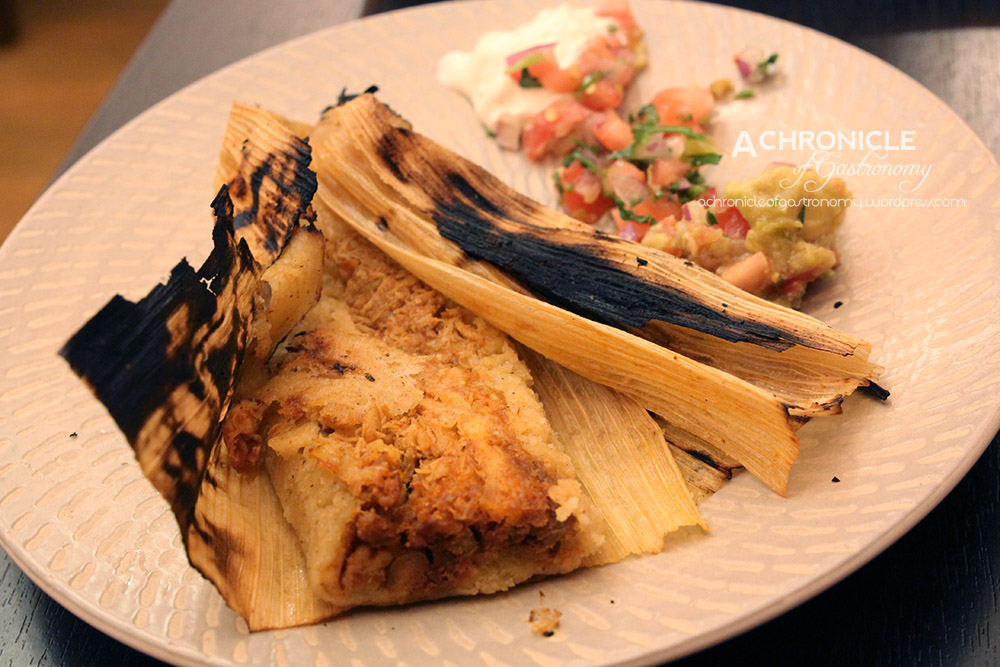 Next came the Tamales De Pollo (3 For $18) – steamed corn husk parcels stuffed with corn flour, chicken and ancho chillies and served with sour cream, pico de gallo and guacamole. I loved the smoky char-grilled aroma they released. Corn husk is more commonly used for making tamales in Central Mexico, whereas banana leaves are more common in the South. Opening the corn husk revealed steaming cornmeal and chicken that was flavoured with well-balanced spices. The chilli flavour was only very subtle. It gave the impression of home-cooked food and I can see this being comfort food for some – they were our favourite dish of the night.

Arriving next were the sopes. The cornmeal cakes were filled with refried beans, rather than having them sitting on top. Slow-cooked pork, picked onion and coriander were then arranged over it. They may look small at first, but were quite filling and satisfying to the stomach and the palate.

Our final savoury for the night was the slow-cooked beef tostaditas (4 For $12). Also with the beef was a corn salsa, cucumber, mayo and panela cheese. Like many things, the tostaditas tasted even better when eaten with hands!

We ended dinner on a sweet note with the churros (5 For $15). They were dusted with cinnamon sugar and were accompanied by two dipping sauces: dulce de leche and chocolate sauce. The chocolate was a blend that included a Mexican dark chocolate, and is so moreish that apparently some customers drink it straight.

North Melbourne is not currently known as a dining destination, but things seem to be slowly changing. As one of these local gems, El Sabor is definitely worth a look for out-of-the-ordinary Mexican food.

Disclaimer: I was invited to dine at El Sabor as a guest, however, opinions expressed here are purely my own and not influenced by them in any way.